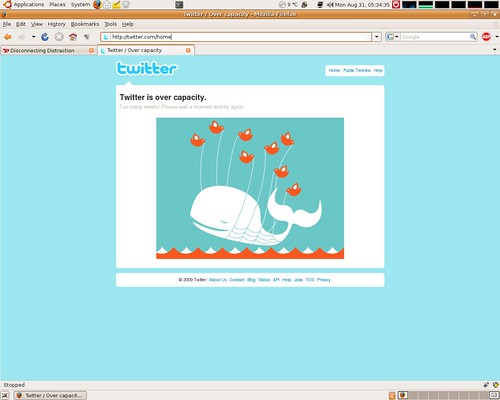 ❝ The current status of Twitter, the risks and what you can do about it.

This FAQ (Frequently Asked Questions) is primarily for @PureAusten users. A list of common questions and answers related to the #TwitterExodus. [0]

The FAQ covers three areas, the current status, the problems it will cause. Finally what you can do about it.

Why Is This A Problem?

The Leadership instability at Twitter is creating a perfect storm of increasing risk to users and Twitter itself.

The Risk Of Doing Nothing?

There will be an increased risk relying on Twitter into the future including:

For a technical explanation of what can happen if you reduce your technical staff, read this exellent twitter thread by technical expert: I've seen a lot of people asking "why does everyone think Twitter is doomed?". [2]

Where Are My People Going?

Where the majority of your users end up, is the place you gain the most utility. The most important issue to consider is "Where are my people going?"

What Are The Alternatives?

Here are some social media alternatives. Twitter has different uses for different people. Economist Business notes ironically "Are any, a suitable substitute?" in Fleeing the nest [3] ⚠ (Turn off JavaScript to read).

Here are the main Social Media services I can think of:

Read what Guardian—Tech Journalist Alex Hern, has to say: How to quit Twitter – and where to go instead [4].

Read what Bill Buddington of the EFF says about the privacy and security of Mastodon: Is Mastondon Private and Secure? [5].

What Can You Do?

❝The engine that drove Twitter was the people. Nothing more. Nothing less. [6]

Questions you should be asking:

The value of Twitter is its Users. Take note of what your friends are doing. You have the choice to:

I would advise the third option, "Stay and Leave". Maintain your existing Twitter presence and explore alternatives. However there are some implications that you have to consider even if you stay. Have you used Twitter to authenticate some other third party website? If Twitter is compromised, these logins could also be exploited by bad actors.

Security Check On Sites That Have Used Twitter To Authenticate

There are security implications should consider even if you stay.

If Twitter is compromised, these logins could also be exploited by bad actors. To verify if you have used Twitter to Authenticate other websites:

I have decided to replicate @PureAusten at Mastodon. [7] To do this I have created multiple accounts on Mastodon. Let's dig deeper.

Mastodon started in 2016. It's a Social Networking service allowing Users to interact with each other. Mastodon has Users. Users are members of Instances (think of them as little Twitter servers). There are many Instances that make up the Fediverse.

The Fediverse is a collection of many different Instances (little Twitters) that Users can both join and communicate between.

Who Is In Charge?

Twitter is being run (badly) by one person. The Fediverse is a form of decentralised control. No one person controls users.

Users, Instances, The Fediverse And Technology

What is the relationship between Users, Instances and the Fediverse? What is important to know about the choices of technology Mastodon has made?

Remember, when you join Mastodon you become a User.

An Instance is a fancy word for a Computer servers that runs multiple pieces of software that make up Mastodon. System administrators tend to these computer systems. People are in charge of planning, costs, administration for all Instances.

What is the Fediverse? [10] The Fediverse is the collection of many Instances. To date there are 7,717 Instances in operation [11] and growing. The key to the Fediverse is interoperability. Instances talking to each other using computer communications protocols make this possible.

The three most important aspects of the technology used to build Mastodon:

Read this excellent article on the advantages of a decentralised Mastodon by Kathy Reid, "What's Mastodon and what's it got to do with cybernetics?". [12]

Mastodon Instances, the Fediverse have the following characteristics:

[2] MosquitoCapital, "Semi—retired SRE: I've seen a lot of people asking 'why does everyone think Twitter is doomed?' As an SRE and sysadmin with 10+ years of industry experience, I wanted to write up a few scenarios that are real threats to the integrity of the bird site over the coming weeks." <https://twitter.com/MosquitoCapital/status/1593541177965678592> [Last Accessed: Sunday 20th November, 2022]

[3] ⚠ Turn JavaScript off to read! Economist Business, "Fleeing the nest: Alternatives to Twitter see an influx of users. Are any a suitable substitute?" <https://www.economist.com/business/2022/11/17/alternatives-to-twitter-see-an-influx-of-users> [Last Accessed: Sunday 20th November, 2022]

[4 Guardian Technology, Alex Hern, has to say: "How to quit Twitter – and where to go instead" <https://theguardian.com/technology/2022/nov/08/how-to-quit-twitter-and-where-to-go-instead> [Last Accessed: Sunday 20th November, 2022]

[8] Mastodon, Search, "Mastodon's full-text search allows logged in users to find results from their own toots, their favourites, and their mentions. It deliberately does not allow searching for arbitrary strings in the entire database." <https://docs.joinmastodon.org/admin/optional/elasticsearch/&ght; [Last Accessed: Sunday 20th November, 2022]